The Last Witch of Pennant Gofid
Lorna Smithers
I journeyed for weeks
through mist and hunger
to find the split rack of her bones,
bones stripped, flesh burnt
and boiled in the cauldron,
blood drained and bottled in two jars.

I plundered the ashes where the cauldron stood,
sniffed for blood where the jars were filled.
Played maracas with her bones,
made intricate arrangements,
chanted and sung
but could not raise her ghost.

“She is amongst the spirits of Annwn now,”
spoke the god I called instead.

“Lay her bones to rest. In the fire of poetry
console her burning spirit.” 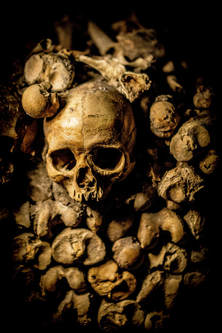 I’m laying her bones to rest. The Last Witch of Pennant Gofid. Her name was Orddu. It meant ‘the Very Black Witch’. Whether she had black skin, black hair or used black magic seem irrelevant now. All that is left is her scapula split in twain, her shattered pelvis, two arms, two legs, her broken skull. Jagged shadows in two orbits retrieved from either side of the cairn.

Her bones are still. I am angry and restless. I cannot abide the story of her death. How Arthur came as he always did into every story every world every myth with his hatred of witches: sword slung over his shoulder like a sundered lightning bolt, a living knife in his hilt, a shield on his thigh adorned with an image of the Virgin Mary, aboard a huge mare.
Caw of Prydyn behind him a giant with a curling beard and the damned jars like heinous milk bottles on each side of his saddle; half a man in size, well-stoppered, thick-glassed, unbreakable. Then the retinue with spear and shield, tawdry banners and flags.

Following to stragglers’ jeers Hygwydd the servant staggering bow-legged bent-backed beneath the gigantic cauldron that brewed food for the brave. Hygwydd’s brother Cacamwri with Hir Amren and Hir Eiddil dragging ponies piled with saddle-bags of food and weapons.

At Arthur’s right Gwythyr ap Greidol, a gristled war-lord with fire and a hundred bloody campaigns in his eyes. A blazing passion. And to Arthur’s left Gwyn ap Nudd, the guide who tricked and dizzied their quest cloaked in mist summoning his hounds to eat the fallen from the mountainside.

Of the host who went to Pennant Gofid only a fragment reached the cave where Orddu plaited her black hair, blackened her skin with war-paint, fastened down her helmet. Sharpened her sword then set it aside like an afterthought. Cracked her knuckles and flexed her talons.

When Arthur blanched a voice mocked from the mist “if you’re scared, witch-killer, why not send your servants in instead?”

Arthur pointed Hygwydd and Cacamwri toward Orddu beckoning. She grabbed Hygwydd by the hair, dragged him to the floor, threw off Cacamwri’s assault, arrested their weapons, beat them out bloody and bruised. Arthur sent Hir Amren and Hir Eiddil in to be crushed in her wrestling hold, torn by her talons, beaten out with broken bones. Arthur fumbled for his knife.

“Why are you afraid, Christian warlord?” Orddu asked. “Far from home. Far from heaven. Do you remember I trained your northern warriors? Without my wisdom, gifts from our gods, they will be nothing but bickering chieftains with a lust for gold and immortality that will bring Prydain’s downfall?”

When her twitching halves lay still Caw filled the bottles with her blood still warm and jammed down the corks. They stripped her of armour and flesh. Boiled a merry meal. Stole her sword. Left with a cauldron filled with northern treasure whilst her spirit watched aghast in the misted arms of Gwyn ap Nudd.

I cannot abide the story of Orddu’s death. How Arthur came as he always came into every story every world every myth with his hatred of witches with his living knife to put an end to wild recalcitrant women. Now I’ve laid it to rest I’ll share another story instead.

I shall tell what this fatal blow and the blows on the Witches of Caerloyw cost Prydain (“Prydain will fall!” “Prydain will fall!” “Prydain will fall!”). Not only the fall of the Old North and the Men of the North. The rise and fall of the British Empire (it had to needed to fall). But the splitting and bottling of magical women for over a thousand years.
Draining of our blood. Boiling of our flesh. Testing if we float. Gave us The King James Bible and The Malleus Maleficarum. Took away our prophecies and visions, gods and goddesses, our fighting strength. Gave us virginity and chastity belts. Cut us off from plants and spirits, rocks and rain, rivers and mist, otherworlds.

Over a thousand years on we are but shadows of ourselves. Mirrored pouts tottering on high heels. Watching ourselves on selfie-sticks. Worshipping televisions. Still split in half, bottled, boiling, floating, banging to get out.

Not long ago I split the jars. Escaped to another place. Wandered my estate kissing Himalayan Balsam. Watching Ragwort sway with wasps. Mugwort flowering like coral. But this was not enough. Gods and fairies walked to the world of the dead and called me after them. Since then I have seen the dead walk in the bright eye of the sun.
I could not go back to the jars. To glass windows and tower blocks. To numbers on computer screens. The pencil skirts of offices. To fracking rigs threatening to break both worlds.

So I came to Pennant Gofid searching for answers and companionship on my lonely path. Found only Orddu’s bones and the god who took her spirit. Yet found a link in spirit with a companion and a god in the magical tradition of the Old North.

So I constructed a fire of poetry and spoke my words of consolation:
“Orddu Last Witch of Pennant Gofid
know you are not the last
to walk these paths
to caves and mountain ranges,
through otherworlds and distant ages,
seeking visions of the present
the future and past.

The rule of Arthur has fallen.
Though Prydain still falls
we have broken the jars.
Our blood is no longer contained
by the tyrants of Arthur’s court.
We are winning back our flesh.
Our magic. Our strength.
Remembering our gods.

Know your life will be remembered
where there are prophecies and hailstorms,
rain and rivers, caves and heresy,
in the mists of Gwyn ap Nudd
where your spirit burns
forevermore.” 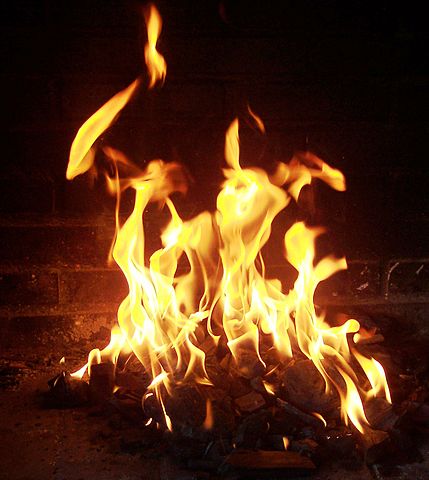 Then I took her bones in my rucksack and crawled through to a dark chamber. On a little shelf beside Orwen ‘the Very White Witch’ I laid Orddu’s bones to rest.