Mist drowns the beach at Borth. Not this-Borth or the other-Borth but somewhere inbetween. An old man, grey-skinned, crane-legged, picks his way along the pebbled edge of his drowned land, spumes of tidal foam spilling over his feet.

He recalls days of watching cranes from the estuary; wide white winged, red and black masked, knowing every step of their dancing legs and its meaning. Words and letters are now slipping away like the patterns of that intricate black-legged dance.

Images wash against him: a drunken sloth, a dishevelled maid, between them a broken cup. Breached floodgates and the sea washing in scarred by lightning bolts beneath a sky of storm.
The madness of a leaping coracle. A face white as sea-foam. A cold hand sliding from his grasp as with a swirl of blonde she was gone.

A youth stirring a cauldron spilling three careless drops. Cracking black iron. A deluge of poison. His beloved horses drinking, rolling, burning, searing, tossing their necks, lips spuming froth.
His son finding that youth sewn into a weathered crane-skin bag instead of salmon in the abundant weir. Unpicking the stitches. The flashing needle speaking its letters. The immortal speech of the radiant-browed one stepping uncanny from the dark unfolding womb.

How that child-bard freed his son from the dragon's castle. His grey-eyed worry and irregular beating of his heart.

The old man can no longer remember any names. He believes this is because the cranes are gone. They upped on white wings on the day of the storm, dark legs carving ominous signs across the skies. Settled in new wetlands. Visited estuaries until the poison spilled, their trembling legs gave way and their wings sunk under the boiling muddy brew (as she sunk years ago).

He will never see each red and black face he knew by name. She will never don her mask. They will never dance, elegant, long-legged at court or knee-deep wading through wetlands.

He picks his way along the edge of his drowned land, white tidal spumes tugging at his feet, face grey and weathered like a bag of crane-skin on tall and unsteady legs. His twitching shoulders remind him of wings carrying him to this beach where he drowns in mist and nameless sorrow.

Beginning to fear he cannot bear his sadness anymore he looks west. The sky is lit by a mysterious brightness. Breaking the pall like lightning a white warrior steps from the mist with a horned helmet, upright shield and spear, leading a white horse streaming from its bridle and a white dog with a tail of clouds whose red nose is the setting sun.

He sways in awe and terror before this fierce bull of battle, who seems to carry the very dead within his person, yet addresses him in the traditional manner and asks with dignity for protection.

"You who ask shall have protection." The warrior's kindness is disarming.

The old man trembles with relief. "Who are you?" "Where do you come from?"

"I come from many battles. Many deaths."

Death-scenes flash before the old man's eyes. Blood drenched armour. Men bent on spears. Words wrenched from agony. Flesh torn by ravens. He sees faces but cannot remember their names although he shares their pain and tears drench his cheeks. A wild whinny shakes him.

"My horse is Carngrwn; terror of the field," says the warrior. "My name is Gwyn ap Nudd, lover of Creiddylad, daughter of Lludd."

When the old man hears those names his inner crane-knowing awakens. He remembers his mother's stories about Gwyn ap Nudd: the warrior-huntsman who haunts wildernesses and places of the dead and may be invoked or placated for love of his partner, Creiddylad. He remembers her crane-tales. How she lifted him from a crane-bag and gifted him with a name.

"My name is... garan..." he stumbles in reply... "Gwyddno... Garanhir." As he recalls being taken into his mother's white, feathery wings, other memories flood back to him: the names of his wife Ystradwen, his son Elffin, the child-bard Taliesin, Seithenin and Mererid who broke the flood gates.
Gwyddno speaks his rush of memories to Gwyn, who listens patiently until Carngrwn paws the tides and pulls away from the bridle, chomping foam from his golden bit.

"The white horse calls this talk to an end," Gwyn speaks abruptly. "We must depart to further bloodshed in Tawe and Nedd, not this Tawe but the one far away where the tide ebbs fiercely on the shore. To my sorrow I attended a battle at Caer Fanddwy..."

Gwyddno shivers at Gwyn's words of another Tawe and the name of a fortress that is not of thisworld. He recalls stories about Gwyn riding forth from the otherworld to gather the souls of the dead. An awful knowing washes over him like tidal waters beginning from his toes.

The white hound draws closer ruddy-nosed. "His name is Dormach," says Gwyn. "Do not fear him. He was with Maelgwn and has accompanied many of the other men of your lineage to protection within my realm."

"I was there at the deaths of Gwenddolau son of Ceidio," Gwyn says, "Bran son of Ywerydd, Llachau son of Arthur, Meurig son of Careian and Gwallog son of Llenog. I helped them cross. They will be waiting for you on the otherside."

As the names of long forgotten kinsmen return to match their war-torn faces, Gwyddno yearns to be re-united. His crane-wings stir.

Yet the gatherer of souls has not finished his speech. Gwyn cries:

"I was there when the warriors of Britain were slain,
from the east to the north;
I live on; they are in the grave.

I was there when the warriors of Britain were slain,
from the east to the south;
I live on; they are dead."

Gwyn mounts his rearing white horse and they depart in a fury of sea foam into clouds of unendurable brightness.

The mist lifts and Gwyddno sees his lost land illuminated within a boat's reach by the light of the setting sun. Yet he does not need a boat and oars to follow where Dormach leads.

Gwyddno Garanhir hears the call of cranes bellowing, aching, sees their white wings, recognises every face, knows it is time to return to the flock. He spreads his wings. Puts on his red-black mask. His legs spell his crossing in black letters across blue-bright skies as he joins his kindred, finally touching feathers with his wife, promising later they will dance their names. 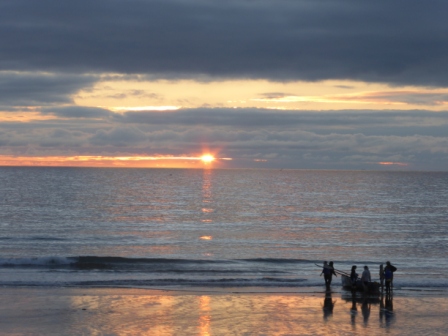