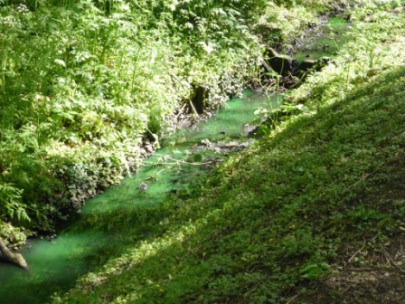 The Polluted Stream
On Wednesday 3rd of June 2015, I participated in a writing workshop with Sarah Hymas based around the 'Understanding the Ritual' exhibition at The Storey in Lancaster. The artworks were based around shamanistic traditions and Sarah prompted us to use techniques such as writing in the voice of a piece and journeying into it to finds it origins.

I chose a painting by Sumit Sarker called 'Nymphs1e7'. This stood out due to the sheer contrast between the blackness of the ocean from which the nymphs emerged and their shining eyes molten and tear-bright. It also gripped me as a vision of a possible future.

The story it told was of an oil spill in rising seas which had consumed everything but a fog-surrounded lightning-plagued bastion. Despairingly I found myself posing a random stream of questions: "All the houses are gone?" "All the washing lines?" "All the gardens?" - "Everything".
Yet, more hopefully, when I communed with the nymphs they told me of their birth from a tear in the North Sea. They came "speaking not silent to release the fire of the impossible". They also said: "there has always been a beginning".

Still shaken by this vision of environmental disaster the next morning I consulted my patron god, Gwyn ap Nudd. He told me its source was "The Broken Cauldron".

I was suddenly transported to a land where a cauldron lay in huge and broken shards. From it poured poisoned streams broiling and bubbling. Horses drinking at their banks collapsed foaming at the mouth convulsing sweating themselves into the hills. Amongst them walked a long-legged man trying to numb their pain with whispers in their twitching ears. When their eyes dulled and glazed he wept.

I recognised this scene from The Story of Taliesin. I was looking upon the cauldron of Ceridwen shattered as a result of Gwion Bach's carelessness tending her magical brew. Whilst Gwion escaped with three drops of pure Awen the rest of the mixture became poison and killed the horses of Gwyddno Garanhir.

I stood on the last remainder of Gwyddno's land to escape the flood after Seithenin (or Mererid) failed to close the flood gates. The land where Gwyn appeared to Gwyddno on the brink of death and escorted him to Annwn. The land where in my life time a storm has exposed the petrified forest that gave rise to the story of Cantre'r Gwaelod and burst bankings at Borth have revealed the weir where Taliesin was found. A land threatened by rising sea levels.

For the first time I had made a genuine connection with The Story of Taliesin.

My inability to connect with it once troubled me because it is seen by most Druid orders as central to the Bardic Tradition: Gwion's transformations as he flees from Ceridwen and his rebirth from her womb represent initiation. Instead of identifying with Taliesin I felt like Avagddu ('Utter Darkness'), Ceridwen's son for whom the potion was brewed and got none, a dark outsider looking in.
And I am still an outsider watching with horror as Gwion escapes with the Awen and Gwyddno's horses perish in the poison. Recognising the terrible price of three drops of inspiration...

Whilst Taliesin is venerated by Druids as the spirit of the Awen incarnate slipping effortlessly between worlds and forms, little attention is paid to the cost his theft exacts on the land and its inhabitants.

This is paralleld in his later life. Taliesin shamelessly and sycophanticly sings the praises of northern warlords in return for riches and mead as the Brythonic kingdoms fall. His reckless determination to steal the cauldron from the Chief of Annwn with King Arthur results in the death of hundreds of men.

Taliesin epitomises all that is questionable and dislikeable about the Bardic Tradition. I would rather identify with Avagddu than with the thief who refuses to learn from his mistakes and whose selfish greed can only lead to the world's end as Ceridwen swallows everything.

I would rather walk my own path in devotion to Gwyn and the spirits of the land than be complicit in the mysteries of Taliesin.

Like Avagddu, Gwyn is a god who haunts the peripheries of the Bardic Tradition. He appears in liminal times and places to guide the dead (or near dead) and holds back their fury lest it destroy this-world.

His world is Annwn: 'not-world' 'the deep'. There he keeps a cauldron that is whole and filled with stars: the infinite reflection of the womb of Old Mother Universe, Ceridwen.

Gwyn offers the possibility of fixing the broken cauldron by gathering the poison back into it from the land. Retrieving the spilled stars, the "fire of the impossible", the unknown stories of those who perished ignominiously. Telling them back to the universe to sate the fury of the spirits of Annwn and soothe Ceridwen's wrath.

Gwyn's Star Cauldron is not a prize to be won but represents a task to be performed. A way of amending Taliesin's mistakes. This will not be fulfilled in my life-time and may never be fulfilled. But like the star-bright nymphs emerging from a tear in the oil-slick seas before the northern fortress it offers a glimpse of a new beginning.