Orddu, the Very Black Witch
Lorna Smithers
‘There is no document of civilization which is not at the same time a document of barbarism.’
Walter Benjamin

Orddu has been a powerful presence in my life since I started investigating the story of her death. In the medieval Welsh tale, Culhwch and Olwen (1070AD), she meets a gruesome end. She is cut in twain by Arthur’s knife, then her blood is drained and bottled to dress the beard of the giant, Ysbaddaden Bencawr.

The murder of Orddu is the penultimate act in a trail of bloody atrocities committed by Arthur and his men so Culhwch can win Olwen. Ancient animals are hunted down, giants butchered, otherworldly treasures stolen, numerous historical and mythical figures subordinated and incorporated into Arthur’s court. Finally, Ysbaddaden is barbered and beheaded.

The civilising rule of Arthur as a champion of Christianity unifying Britain is asserted by his barbaric assault on this land’s divinities and those who interact with them. His reign as a national hero is based on his wiping out not only of the lives, but the stories, of a myriad Others cast into an abyss of ignominy from which few of us hear their screams.

Orddu’s death cry has resounded in my ears for several years now. Sadly she does not appear in any other sources. Nothing is known about her outside Culhwch and Olwen, where she takes to the stage for a brief and brutal battle before her life is snuffed from the page and from history. However, clues to her significance can be gleaned by reading the surface text otherwise, from the perspective of Annwn, ‘the deep’, the ancient British Otherworld.

Orddu is introduced as ‘the Very Black Witch, daughter of the Very White Witch’ (Orddu means ‘Very Black’ and Orwen ‘Very White’). This is suggestive of a matrilineal tradition of witchcraft passed on from mother to daughter through the generations. Whether Orddu and Orwen are titles, or refer to the witches’ skin colour, hair colour, or the type of magic they practiced remains unclear. Still, these women can be pictured singing spells, passing on plant knowledge, caring less for labels than the flow of magic that runs in their blood and sings in their souls.

When Arthur embarks on his quest to bottle Orddu’s blood he sets out for the North. Northern Britain, with its rough terrain and cold weather, where the influence of Rome struggled harder to maintain its hold, is traditionally viewed as hostile and dangerous in medieval Welsh literature.

Orddu is located in ‘Pennant Gofid in the uplands of hell’. Pennant Gofid means ‘Valley of Grief’. This may be viewed simultaneously as a place where people come to grief and a place where they come to grieve. ‘Hell’ is translated from ‘Uffern’, ‘Inferno’, a word used synonymously with ‘Annwn’. The associations with mourning and the Otherworld suggest Pennant Gofid was a valley of the dead and that Orddu was its custodian. As such it would have been viewed as profoundly sacred by local ‘pagans’, but as hellish by Christian intruders with no understanding of their beliefs. I have not managed to locate Pennant Gofid within the physical landscape, but when I journey there in spirit it is steep and stony. A white river with foaming rapids roars through it. Through its ever-present mists hardy stumpy trees can be glimpsed, cairns, dolmens and, occasionally, mountain ghosts.

Orddu is found in a ‘hag’s cave’. This signifies her connection with ancient ancestral traditions which have no place in the civilised world of Arthur. Caves are places of access to Annwn and its mysteries. The bones of Orddu’s ancestors may have been buried in the cave’s recesses. In my journeywork it is half way up the valley; a precarious scramble. Nearby a spring emerges from the rock. There I received the gnosis it is the place Orddu and her kindred grieved for their predecessors and the dead who are buried in the valley. Their salt tears are the source of the white waters of the River of Grief. There I mourned Orddu’s death.

To find Orddu’s cave, Arthur is dependent on the guidance of the pre-Christian deities Gwyn ap Nudd (‘White son of Mist’) and Gwythyr ap Greidol (‘Victor son of Scorcher’). Gwyn is a god of Annwn and ruler of its spirits who are referred to as ‘demons’ in Culhwch and Olwen. In The Black Book of Carmarthen (1350AD) he appears as a gatherer of the souls of the dead.

Gwyn and Gwythyr are deadly rivals for the love of a maiden called Creiddylad. In an earlier episode, Arthur put an end to their conflict by placing a command on them to fight for Creiddylad every May Day until Judgement Day. Their appearance together and as advisors to Arthur seems contrived as a way of demonstrating Arthur’s power.

Read beneath the surface and we see that Gwyn’s presence in Orddu’s story has deeper roots. If Orddu is located on the edge of Annwn, then Gwyn is the deity who must be called upon to part the mists to find her. Orddu’s witchcraft may be rooted in her relationship with Gwyn as a god of Annwn and with the spirits and the dead who he presides over.

Evidence of groups working magic with the deities of the Otherworld has been found in Gaul. The Tablet of Larzac (90AD), from a seeress’s grave, refers to a coven of witches practicing andernados brictom ‘underworld-group magic’. The Tablet of Chamalieres (50AD) evidences a group of men calling on ‘Andedion’ ‘Underworld God(s)’ for aid in battle. ‘Annwn’ and ‘Andedion’ share the same stem. The poet Dafydd ap Gwilym refers to ‘witches of Annwn’ suggesting similar groups existed in Britain.

We also have records of a native tradition of prophesy and spirit-work. In his Description of Wales (1194AD), Giraldus Cambrensis refers to ‘Awenyddion’, ‘people inspired’ who are possessed by spirits and perform oracular trance when consulted on ‘doubtful events’. Orddu can be pictured prophesying with the spirits of Annwn and invoking their aid. Arthur’s subordination of Gwyn represents the negation of her source of magic.

When Arthur and his men approach Orddu’s cave she shows no sign of fear. Arthur hesitates until Gwyn and Gwythyr advise him to send in two of his servants, Hygwydd and Cacamwri. Orddu grabs Hygwydd by the hair and wrestles him to the ground, disarms and thrashes them both and beats them out ‘shrieking and shouting’. When Arthur tries to rush the cave, Gwyn and Gwythyr say, “It is not proper and we do not want to see you wrestling with a hag.” They tell Arthur to send another pair of servants in. We do not hear what Orddu does to Hir Amren and Hir Eiddil (Hir means ‘long’ or ‘tall’ - these are formidable men), only that their fate is ‘far worse’ and the four are so severely incapacitated they cannot escape without being put onto Llamrei, Arthur’s gigantic mare. After this, Arthur loses his temper and strikes Orddu dead.

It is uncertain whether Gwyn and Gwythyr are being presented as stupid or as tricking Arthur to defend Orddu. Whatever the case, in spite of being alone in her cave and outnumbered, Orddu displays considerable skill in hand-to-hand combat and puts up a courageous fight.

Comparisons may be drawn with the witches of Caer Lowy who teach Peredur how to ride a horse and handle weapons. Afterward, Peredur turns on them and slaughters them with Arthur’s aid. Conspicuously he kills one of the witches by striking her on the helmet so her head is split in two. As she dies she tells Peredur he was destined to kill her. It may be conjectured that Orddu belonged to a similar lineage of women who were not only witches but also trained the warriors of the North.

Thus it makes sense that for Arthur’s tasks to be completed this powerful woman must be removed from her position at Pennant Gofid where she teaches the arts of warriorship and utters prophecies from the mouth of Annwn. Her death signals the end of a tradition that may be as old as the ancestral remains in the cave where she abides.

Long has she lain there, her skull split in twain, her bones in two weary piles. Long has her story been forgotten, until now, as the rule of Arthur and the hegemonic brand of Christianity that gave us the Crusades, witch hunts and the British Empire united under ‘One King, One God, One Law’ begins to crumble.

The blood of witches does not stay bottled forever even in the bottles of a dwarf. The glass walls that contain magical women are shattering. Orddu’s call is to win back our powers of prophecy and fighting strength, to rebuild our relationships with Annwn and its gods and spirits. To reach into our caves of potential and fulfil our vocations with courage, remembering how her life was cut short. 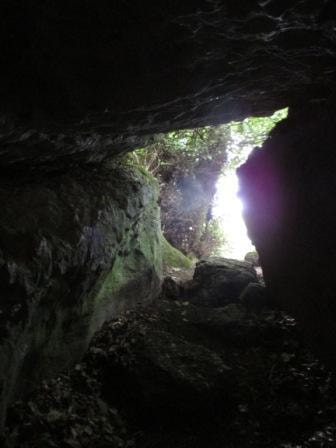 *This article was solicited by Kate Large and was first published in Pagan Dawn, No 202, Spring 2017