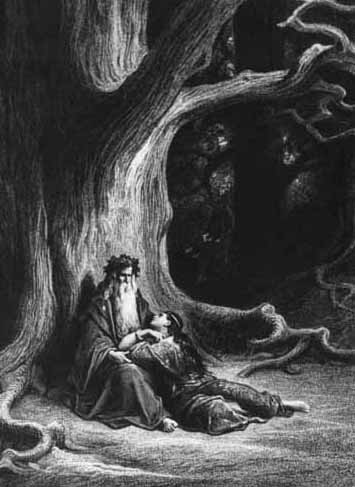 Everyone knows who Merlin is – or do they?
For many the stories about a wizard who aids King Arthur are an integral part of the Arthurian Romance tradition. But trace that tradition back far enough and both Arthur and Merlin have separate existences unrelated to each other. The two were brought together by Geoffrey of Monmouth in his History of the Kings of Britain (c. 1136). Geoffrey had previously published a series of Prophecies of Merlin and included these in his ‘History’. Some years later he wrote a long verse ‘Life of Merlin’ which draws upon pre-existing Welsh legendary material about a character called Myrddin who lived as a wild man in the Caledonian Forest. Gerald of Wales, writing later in the twelfth century, speaks explicitly of two Merlins: Merlin Ambrosius and Merlin Silvestris. While he is likely to have drawn these from the work of Geoffrey he may also have seen other material and claimed he had his own ancient book of the prophecies of Merlin, though he never published these.

Geoffrey based the Merlin of his ‘History’ on a character called Ambrosius mentioned by Nennius in the ninth century and attached him to the stories about King Arthur. He may not have become fully familiar with the earlier Welsh legendary material about ‘Myrddin Wyllt’ until after writing his ‘History’ and there is no mention of Arthur in his later ‘Life of Merlin’ which is based on the earlier material in Welsh, some of which has survived. This Merlin, like Taliesin, was regarded as a prophet and had a number of verses attached to his name over an extended period of time. The earliest ones, probably from the ninth or tenth centuries rather than the sixth century when he was supposed to have lived, are contained in a series called the ‘Afallenau’ because they are addressed to an apple tree which seems to afford him some sort of protection and prevent others finding him:

In this glade a sweet apple tree
From Rhydderch’s men hides me
Though many are there to see.
(Awallen peren atif in llanerch/y hanger tae hargel rac riev Ryderch/amsaethir in y bon. maon yn y chilch.)

He was living in the woods as a wild man following the Battle of Arfderydd where Gwenddolau was defeated by Rhydderch Hael. This battle is an historically attested event and is thought to have taken place at Arthuret near to the border between England and Scotland in the year 573. It is likely that the legendary ‘wild man’ stories (which have parallels in the Scottish tale of Lailoken and the Irish tale of Suibhne Geilt) became attached to the story about a survivor from the Battle of Arfderydd. There are references in the ‘Afallenau’ to Merlin having the company of a “fair, wanton maiden” ( bun wen warius) in his early days in the forest but she has left him by the time the verses are written. There is also a dialogue between Merlin and his sister Gwendydd whose son Merlin has slain in the battle and this is given as a reason for the madness that made him flee to the forest.

Armes Prydein (‘Prophecies of Britain’) in The Book of Taliesin contains the phrase “Merlin predicts …” which appears as a parallel to “Awen predicts …” elsewhere in the poem. Also attributed to Merlin in in The Black Book of Carmarthen  is a ‘conversation poem’ (Ymddiddan) between himself and Taliesin. Here there is a fluidity of identity between the two prophets so that they seem to become one:

As I am Merlin
And again Taliesin
Eternal my singing
My prophecies unending.

Consider the words of Elis Gruffydd from his 16th century Chronicle of the Ages:

"Some people hold the opinion and maintain firmly that Merlin was a spirit in human form, who was in that shape from the time of Vortigern until the beginning of King Athur's time when he disappeared. After that, this spirit appeared again in the time of Maelgwn Gwynedd at which time he is called Taliesin, who is said to be alive yet in a place called Caer Sidia. Thence he appeared a third time in the days of Merfyn Frych son of Esyllt, whose son he was said to be, and in this period he was called Merlin the Mad. From that day to this, he said to be resting in Caer Sidia, whence certain people believe firmly he will rise up once again before doomsday."

The idea that Merlin and Taliesin were the same person in different guises was common enough for Elis Gruffydd to report it, and a note to this line in  Jarman's edition of the Black Book indicates that the reading of 'guydi' (modern Welsh 'wedi' = 'after') can also be also be construed as 'before' or 'in the guise of' in medieval Welsh. Patrick Ford, discussing of the Taliesin legend in the Introduction to his Ystoria Taliesin, says that the two are "aliases of a single poetic spirit" and hence the same figure appears in Irish texts identified as "the ﻿Spirit of Poetry﻿".

And so Myrddin becomes one of the ‘Cynfeirdd’ (earliest poets writing in Welsh) located in the area known later in Wales as ‘The Old North’, and like Taliesin a bard with prophetic powers. Once his legend was established in Wales it also became associated with Carmarthen because his name seems to be contained in the Welsh form ‘Caerfyrddin’, though this actually originates in Moridunon which would naturally have developed into ‘Mer-ddin’ (Sea Fort) and the tautology ‘Caer’ would have been added when it was thought of as ‘Merlin’s Town’. This is compounded by the fact that the verses of Myrddin are recorded in the manuscript of The Black Book of Carmarthen and therefore seeming to record a local tradition. At the same time, Geoffrey’s composite Merlin was gaining fame across Europe as the wizard behind the throne of King Arthur and gaining further accretions as it did so. He has been reinterpreted in our own day among other things as, e.g., Gandalf in Lord of the Rings, and reconstructed by the writer Nikolai Tolstoy, as a remnant druid and priest of Lugh surviving in the Celtic kingdoms of the North. He still has the power to conjure such images as a figure who answers the call to something embedded deep in psychic space: the magician, the wise man, the hermit removed from but integral to our cultural life.

History of the Kings of Britain by Geoffrey of Monmouth (translated by Lewis Thorpe, Penguin Books, various editions)
Life of Merlin (Vita Merlini) by Geoffrey of Monmouth (translated by Richard Barber in Myths and Legends of the British Isles, Folio Society 1998) ; also JJ Perry (Forgotten Books, 2008)
Journey Through Wales and Description of Wales by Gerald of Wales (translated by Lewis Thorpe, Penguin Books, various editions)
‘Early Stages in the Development of the Merlin Legend’ by A.O.H. Jarman in Astudiaethau ar yr Hengerdd (ed. Rachel Bromwich a Brinley Jones, Gwasg Prifysgol Cymru, 1978)
Trioedd Ynys Prydain ed Rachel Bromwich (University of Wales Press, various editions) also contains useful discussion and quotations.
The poems attributed to Myrddin are contained in the manuscripts of The Black Book of Carmarthen and some are anthologised though these are hard to find in translation (the translation above is mine). A good source of extracts is the edition with translations by Meirion Pennar (Llanerch, 1989)
Ystoria Taliesin ed. Patrick K Ford  (Gwasg Prifysgol Cymru 1992)