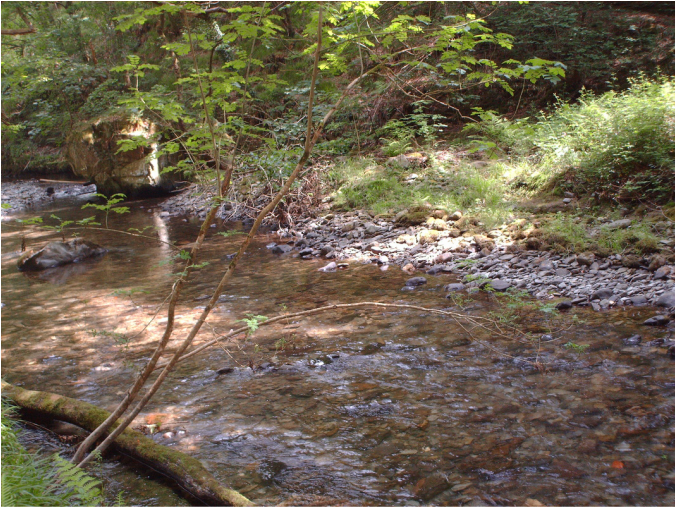 The valley of the river Leri (as it is named on maps) or Eleri, as those who know her call her, begins on the western edge of the Cambrian Mountains where the river waters fall from a lake into the narrow gorge of Craig y Pistyll. They run for twenty miles or so to reach the sea through the salt marsh between Borth Bog (Cors Fochno) and the sand dunes of Ynys-Las. In spite of the natural settings of both her source and her estuary, both are engineered places. At the end of the lake where the waters fall into the gorge there is a dam to regulate the flow down to the water pumping station on the nearest road in the village of Bontgoch, or Elerch, five miles away. But this is a lonely place and little detracts from the wild splendour of the open mountain and moorland that stretches as far as the eye can see even on a clear day when there is no mist. And it is a small dam, unlike the barrier at the end of the nearby reservoir of Nant-y-Moch that regulates the flow into the river Rheidol to a small hydro-electric power station miles downstream. These waters drain from the mountain of Pumlummon(‘five peaks’) as do the springs that give rise to the River Severn and the River Wye. Up on the summit Cei and Bedwyr stood in “the highest wind in the world” in their search for the things required by the giant Ysbadadden Pencawr for Culhwch to wed Olwen. So it is a place of great significance both in legend and its importance as the source of great rivers. Further east waters run off this range to fill the reservoirs of Claerwen and Elan for Birmingham’s water supply. But Eleri is a quiet stream running a short distance to the sea and supplying sweet water to the local population. Pumlummon is known as the ‘Mother of Rivers’ and the whole area is a place of water, held in the peaty earth as in a sponge. Waters of life welling up and then released slowly into streams and rivers. It is a realm of water spirits.

In their book Celtic Heritage, Alwyn and Brinley Rees compare the area around Pumlummon – known traditionally as ‘Elenydd’ -  to Uisnech in Ireland where the Stone of Divisions stands. It is the centre which symbolizes the whole. By no means as high or as spectacular as the mountains of Snowdonia or the Brecon Beacons, its central position between these gives it a symbolic significance, better appreciated by the medieval mapmakers such as Gough who, in his map of 1360 shows it as if it is higher than the mountains to the north and the south, through to Speed’s map of 1612 which gives it similar prominence. Eleri runs off to the West of the mountain, away from the great watersheds and once meandered to the sea through the remnants of a sunken forest, the semi-petrified remains of trees that can still be seen in the sand at low tide on the beach at Borth on the shores of Cardigan Bay. It is possible to trace the previous course of this mile or so of the river over the fields created by draining the bog. But now the last stretch runs in a straight line to meet the estuary of the River Dyfi and functions as a drainage channel separating the green water meadows from the brown lands of the bog.

What river ever maintained its course for very long? Cwm Eleri is Eleri’s valley, the groove in the Earth the river has created, wide or narrow depending on the interaction of water, soil and stone. There are many things that might change a river’s direction; human interference has shaped most rivers for a while, but the river itself is invincible, the life-blood of the living world. So this sudden transformation from a sinuous bubbling stream to something more resembling a canal might seem an insult to Eleri in human terms. But somehow it suits the flat landscape of the bog and is symbolic of the lost land of Gwyddno Garanhir whose dykes and defences could not prevent his land from being flooded. For this in legend was Cantre’r Gwaelod, a land under the sea, and it is a legend to which the sunken remains of the forest bear witness. Walking through the stumps when the tide is out it is possible to imagine the forest alive with birds in the green leaves, though the present reality is rock pools and oyster catchers foraging at the tide line. Along the estuary geese overwinter and in summer sand martens build nests in the banks.  The bog broods darkly in the shade of mountains. Once it stretched north along the Dyfi nearly to Machynlleth, though most of the northern part of it has long since been drained for farm land. The small hills that rise from the flat plain all have ‘Ynys’ (‘island’) in their names, an indication that they once stood above wetlands. It was the realm of ‘Yr Hen Wrach’ (the Old Witch) who, if she visited you in your bed at night, would cause you to wake with the shakes. It is also the abode of ‘The Toad of Cors Fochno' who, in an alternative folklore version of ‘The Oldest Animals’ episode in the tale of Culhwch and Olwen, is the oldest created being.

Between these two ends of the river, Eleri runs through wooded valleys, only really touching any significant place of human habitation when crossed by the main road north from Aberystwyth at the village of Talybont where, joined by the waters of the Ceulan, the rushing waters once powered a woollen mill. Along the ridges of the valleys around here are a series of hill forts built to watch the approaches from the sea and now providing spectacular viewpoints to anyone with the energy to climb to them. Though I have walked from source to estuary, it is in these middle stretches that I came to know and love Eleri. There are places where it is possible to sit watching the flow for hours without seeing another person. These, to me, are sacred waters, the well of life flows through me when I sit here and I am part of the flow. And it is here, and in the woodlands along and above the valley, that I come to meditate and to commune with the spirits of the valley. The map of it I have in my mind is populated with sacred places to which I can go, on foot or in imagination, whenever world space or mind space allows. There is a place where the river swirls around a bend and runs over rocks making a music that I have sat and listened to, entranced. And I have knelt in the rushing waters and the words of a ritual for crossing to sacred ground came to me from many years before: “Running Waters, Speaking Stones …”. And I have listened to the voice and responded with a blessing and a kiss, which she took, laughing, and tumbled it away.

There is a wood of oak, beech and birch above this spot, enclosed within a larger forest, where I have planted a seed of love in a mossy hollow and where the trees always welcome me when I come to sit among them to converse with the spirits of the wood and feel myself in their company. Here I have felt closest to the Spirit World more often than anywhere else. There are times when the trees enclose me and the ground shifts beneath my feet and the wind blowing through that place is a spirit wind at once swift as an arrow and as still as a pond of clear water. Then when I emerge from the wood onto the forestry road it’s as if I have arrived there suddenly from I know not where. So I come often to these places and follow Eleri from her source in the mountains to her meeting with the sea. And if she is always running to the legendary realm of Cantre’r Gwaelod, so too am I always walking the spirit paths when I follow her winding way through the woods